The New Position | NOT 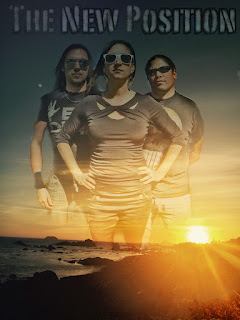 Emerging from the carnage of over-saturated media is a difficult thing to do. With so many online radio stations and mobile apps that are streaming music non-stop to the public, it can be very difficult to find good music. I've created this blog to feature some of the musicians that you may have missed in the shuffle.

One band that rises to the top of my list as one of the greatest unknown bands is THE NEW POSITION. As a child of the late 80's and early 90's, I grew up listening to some of the most influential hard rock and alternative music that has shaped our modern society. Bands like Soundgarden, Nirvana, Nine Inch Nails, and Metallica are all staples of what paved the way for modern contemporary rock music.

TNP has reinvented the simplicity of heavy rock music with the delicate touch of female vocals. TNP's music of heavy guitar riffs that shred your soul and drum beats that kick you into next week are what lay the foundation for this impressive trio.

Modest Goddess layers her thought provoking vocals over this hard rock music with such grace and elegance. Lyrics that get stuck in your head are the best kind because they strike a chord with your soul. MG's lyrics and vocal talent are not to be over-looked. This band is a hidden gem in the mass confusion of today's music industry. I predict it is only a matter of time before TNP becomes world famous and takes the crown as the reigning hard rock band of this coming decade.

ARTIST: The New Position
SONG: NOT
ALBUM: Exit Only